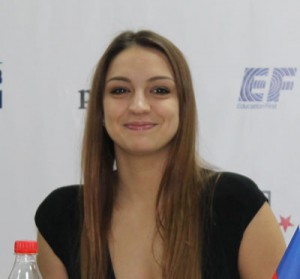 (photo from http://chelny-week.ru/2012/11/evgeniya-kanaeva-gimnastike-nuzhny-takie-centry/ )
Original link: click here
English translated by Ekaterina, Many Many Thanks!!!

Erevan, November 14th – News –Armenia. Two-time Olympic Champion in RG – Evgenia Kanaeva stated that she does not know yet whether she is staying in the sport or finishing her career. The athlete discussed it herself after the Russian Cup opening ceremony in Kazan, says RIA News.

“I did not say I was retiring. Sports are such a thing that you may be on top one day, and a complete nobody the next day; nothing is permanent. I have gotten real high and it is very hard to stay on top for 4 years. It was very hard for me to earn my spot under the sun performing among the strongest Russian gymnasts. It is not at all easy to endure; it only seems from the outside that she has won everything, so it would not be hard for her to get anywhere, provided she stays healthy. But in reality it is not so, – Kanaeva told the press. – In addition to various circumstances, there is also a competition as well as other factors that play a role. But I keep telling myself that everything is going to be alright, put in ear plugs and go forward following my own path. I had my own difficulties, like all other athletes. I am not saying that I am to continue with my career; however, I am not saying I am quitting either. So far there is this pendulum. I am seizing the day. I am doing my best not to plan anything ahead. I am living and enjoying life. So far I have not yet made up my mind”.

Kanaeva talked about her sources of motivation. “All athletes have different motivations. Someone wants to win everything, someone wants to be liked by the audience and get more attention, become remembered. This motivates. There are no unbeatable athletes, there are only unforgettable ones. So I have always dreamed about becoming an unforgettable one”, – said Kanaeva laughing.

Kanaeva was very pleased with the Center of Gymnastics, which has been opened in Kazan today. “They’ve built a wonderful center in Kazan. One of the best. I really like it. The only thing, in China, where the Universiade took place, platforms were a bit larger, but in terms of comfort and suitability for the athletes, both the arena, and the ceiling are alright. The training rooms are fantastic. I am very happy that the sport is developing in Russia,” – said Kanaeva. 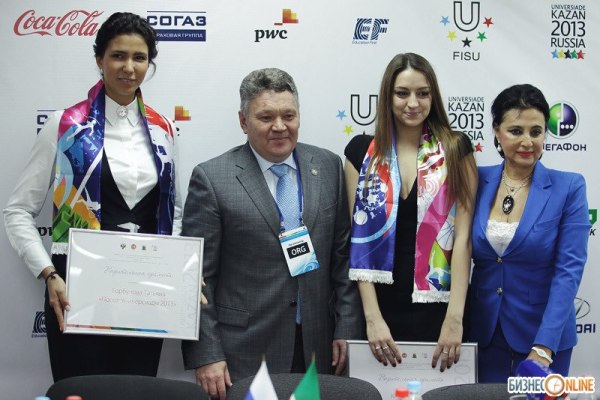 Gymnast Kanaeva said She Was Happy to Become an Universiade Ambassador
original link: click here
English translated by Ekaterina, many many thanks!!!

Kanaeva, as well as another gymnast – Tatyana Gorbunova – joined the list of athletes who agreed to become Kazan Universiade Ambassadors.
“It is very nice that I have been picked to be an Ambassador of 2013 Universiade. First of all, I am an athlete. Second, I want children to go into sports and strive for such heights as participation in Universiade; moreover, it will be taking place in our country, in such a lovely city as Kazan. I very much love this city: here they take organizing and preparing for championships very seriously. They revere athletes, and make everything possible not to leave them without attention. I remember I won Russian Championships here”, – Kanaeva told the press after the opening ceremony of Russian Championships in Kazan.
According to Kanaeva, Universiade and Olympic Games have certain similarities.

“Universiade is mini-Olympics, they are somewhat similar. Of course, Olympic Games are a larger-scale competition, and it feels a bit different. But at the Universiade in China, everything was very serious just like at the Olympics, because they had already held the Games. Everything was strict and official. One could not get on a carpet earlier to look around or be late. It was something like it is at the Olympics, even stricter”, – said the athlete.