Alina Harnasko: “I was plump and did not give hope”

04-July-2017
For the rhythmic gymnastics of the hearts of Belarusian fans are always calm. For the second decade a new talent has replaced one another, no less promising and successful. Our girls very rarely return from international tournaments without rewards, and behind their big names, as a rule, there is a strong Belarusian school and mother of all our artists – Irina Leparskaya.

After the Olympic Games in 2016, the then first number of the national team Melitina Staniouta announced her retirement. “I did everything I could, I can not,” the girl said in her interview after Rio. The team still had a young gymnast, who, nevertheless, already gained experience – Katsiaryna Halkina. It was on her laid further hopes. But Katya began to worry about injuries, which somehow forced to perform not in full force, but somewhere and completely skip the tournaments. At that time, even more young Belarusian grace, Alina Harnasko, said her word. Someone can remember this girl yet at the European Championships in Minsk or junior starts, where the pupil of the Olympic champion Marina Lobach has repeatedly climbed to the podium. And this May, already at the senior championship of the continent, unexpectedly for many, and above all for herself, Alina won a bronze medal in the ball exercise, and then repeated her successes at the World Cup stages. As it was and where it all began, the gymnast told in an interview with the newspaper Zvyazda.

“I am reviewing the first speeches and I think, how could anything come of me …?”
For Alina this is one of the first big interviews, the girl has not yet got used to the increased attention of the press, but, despite the excitement, she is very reasonable in the answers. Alina remembered how her first performances in the elite of world rhythmic gymnastics were given to her.

– The first departure with a senior team was for an international tournament in Moscow, after I went to the Grand Prix in Kiev, where for the first time alone I met the strongest gymnasts of the planet. To put it mildly, those of my speeches left much to be desired, I saw this, coaches said about it. Psychologically, I probably just overloaded myself. As a young gymnast, I needed to just go out and do, without any burden of responsibility, which I assumed. After all, outside the competition area worked normally, the coach knows it, but left the carpet and could not show anything. At some point, it seems to me, the coaches no longer knew what to do with me.

Despite the senior debut failures, the tournaments for Alina continued with the Grand Prix and World Cup stages. Gradually, stability developed, and the peak of the form fell just at the European Championships, where Alina became the third in the exercise with the ball.

– It was very unexpected. After the performance on the scoreboard showed the result, at that time it was probably 2nd or 3rd, but after me there were still many, so I did not even pay attention. She ran to change into another performance. I made the program with clubs and I see that the coaches are too joyful, so, only before the performance with the ribbon, I learned about my medal. By the way, in the clubs, I lost the medal, performed the exercise cleanly, but the refereeing was, in my opinion, too subjective, my rival put only 5 hundredths more.

Ahead of Alina at the European Championship were only Russian women, who today are leaders in the world of rhythmic gymnastics – Aleksandra Soldatova and Arina Averina.

– At the beginning of the year, when I was just starting to perform among the best, I might have looked at them as “stars”, but now I do not get distracted by these things at all. Moreover, we became friends with the girls, the competition only on the court.

Alina Harnasko’s first coach is now working with the French team, from her at 10 years old, the talented gymnast-beginner was in the group to the Olympic champion Marina Lobatch, who is still training the girl. For the first time in the eyes of the head coach of the team, Irina Leparskaya, Alina was in 2013, and from there began her participation in junior and junior international tournaments.

– I live outside the city, near the Republican Olympic Training Center “Staiki”, there used to work there a grandmother, and I always watched the training of athletes. Yes, and the parents themselves say, showed unprecedented activity, so at 3 years I was taken to rhythmic gymnastics. I was very plump and did not give any hope, now, sometimes, I’m reviewing my first performances and I think, how could something come out of me? .. 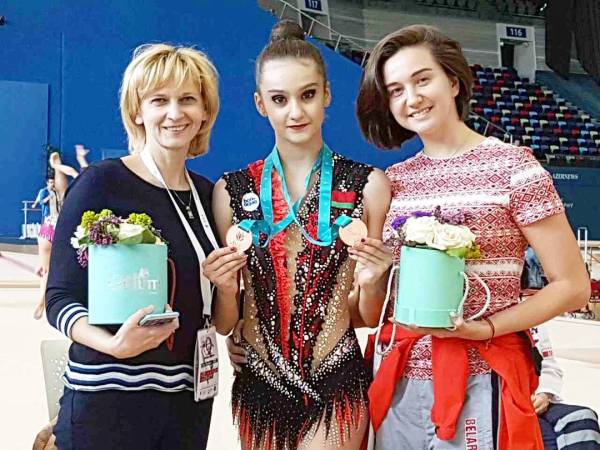 Training for gymnasts of the national team usually takes 8 hours a day, 6 days a week, a vacation of only about two weeks. But Alina knows why she is doing this kind of work.

– Now I am engaged in pleasure, there are difficult, critical moments, when you do not even look at what path has passed, you want to quit everything. But I’ll think about it later when I reach my goal.

Do not frighten a girl and injuries, quite frequent in rhythmic gymnastics.

– Often the apparatus fly right in the face, but in general, the main problem we have is the back, the older you get, the harder and harder to bend. Hips hurt because of stretching, jumping, loading.

I’m interested in Alina about her popularity and popularity, as well as how she relates to the “star” disease. In social networks, the girl today has more than 12 thousand subscribers.

– I hope it does not concern me, I immerse myself in competitions very quickly and forget about my successes. Remind only journalists or fans. Recently I was recognized in one of the Minsk cafes, it was very unexpected. In general, if we talk about the support of fans, then the most staggering it in Spain. I was recently there at the World Challenge Cup stage, I’m still not so famous, nevertheless I saw a huge number of posters with my photos, there were many congratulations, esemes, video. In no other country in the world is this more. My fans have already created a lot of fan groups, pages on social networks. They write me messages in Spanish, and some manage using the Internet to translate them into Belarusian, it’s very entertaining.

Performing at a large full room was unusual, the stands screamed so that I barely heard the beginning of my music, I think, because of this, could make a mistake in the final. But still very nice and convenient to compete with good support. It’s always exciting, but I tell myself that I need to get out and just do the routine the way you did it on the run a few minutes ago.

Now Alina herself becomes an idol for someone, and for her once such people were her coach Marina Lobach and Melitina Staniouta.

– Melitina – a great fellow, the fate has developed so that she did not receive an Olympic medal, and nothing can be done about it. I also always liked the Russian woman Margarita Mamun, and, of course, my coach Marina Vikentyevna (Marina Vikentyevna Lobatch). She always gives me tips, tips, passes her experience, which is very helpful.

“How many forces, sweat and tears were in the hall, remains behind the scenes”

In rhythmic gymnastics, it is not customary to single out a favorite subject, but about what it is most difficult to work with, Alina can say.

– While the apparatus that lags behind me is a ribbon, I did not make it at any tournament without errors, therefore I train this apparatus much more than others. Here is another thing – the behavior of the ribbon depends on the environment – heat, humidity, air conditioners. Each gymnast thinks up for herself some tricks – someone ironing the ribbon with an iron, someone watering, using talc or varnish.

Often rhythmic gymnastics is called a mixture of sport and art, all components are really important here: composition, music, costume, image and, of course, the appearance of the athlete.

– We, like in the ballet, people see everything only the most beautiful – lightness, beauty, grace, and how much strength, sweat and tears were in the hall, remains off-screen. In fact, a performance of a minute and a half is worth a lot of work. Together with the main and personal trainer, music is selected, it takes a very long time. With our images, coaching directors work, they help each gymnast to pick up something of her own. It is important to feel what you are doing, and then to master the elements. After choosing the music and the object is a swimsuit. We have them very expensive, about a thousand and a half dollars.

For a very long time she studied to make herself a make-up and an ideal goulash, at first it was, of course, awful. The coaches, the choreographer, all who could help. And in ordinary life I prefer to be without makeup.