Translation: Yana Kudryavtseva “For me, the Olympic Silver medal in Rio equals to Gold”

Article link: http://izvestia.ru/news/629329
English translated by my friend Alyona, Many Many Thanks!!!

30-Aug-2016
Silver medalist of the Olympic Games in Rio de Janeiro in rhythmic gymnastics Yana Kudryavtseva tells about the results of the Games, a meeting with Vladimir Putin and Dmitry Medvedev, and the situation with the Paralympics. 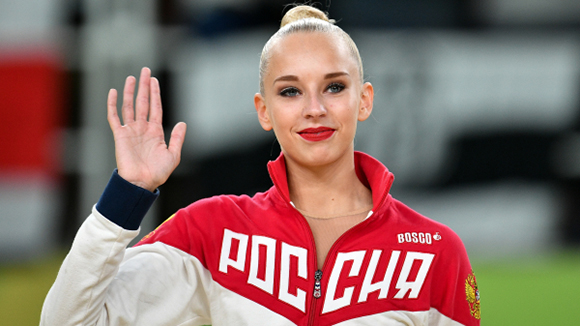 Silver medalist at the Olympic Games in Rio de Janeiro in rhythmic gymnastics, three-time absolute world champion, multiple world champion 18-year-old Yana Kudryavtseva told in an interview to “Izvestia” Alexei Fomin about her loss in Brazil in the individual all-around, the consequences of the injury and plans for the next Olympic cycle.

– Among other Olympians you were met in Kremlin by Russian President Vladimir Putin and Head of the Government Dmitry Medvedev. What are your impressions of the meeting with the top officials of the country?

– Such events always evoke positive impressions and emotions. I was glad to see everyone; it is nice to know that all the country’s leaders have supported us. Both the President and the Prime-Minister have said wonderful words thanking all the Olympians for their performance in Rio in extremely harsh conditions. I was pleased to get such a high evaluation. I was also pleased to hear their words of support for our Paralympian athletes, whom I want to express my admiration and solidarity as well. They were treated really disrespectfully by the International Paralympics Committee. And it is very important that the head people of the country do not forget them and ıntend to support the alternative games within the country. Our Paralympian athletes deserve it after all the injustice towards them.

– What are you busy with after the arrival from Rio?

– I am trying to sleep. For a long time after the flight I couldn’t sleep properly. To be open, I haven’t got enough sleep yet and I haven’t switched to Moscow schedule yet. Actually I have managed to sleep during the flight, but acclimatization in Moscow doesn’t come easy.

– Have you already analyzed the reasons of your loss to Margarita Mamun in the Individual All-Around?

– The analysis was made right after the performance. I have relaxed too early, that’s why I have dropped the clubs. It was a coincidence that no one is immune from. Anyone could drop an apparatus – Rita Mamun or Anya Rizatdinova (Ukrainian gymnast, a bronze medalist in Rio in the Individual All-Around). Hence, it is a fate. We will continue to work.

– What did Margarita Mamun tell you after the performance?

– Margarita always supports me. Just as I do when she doesn’t manage something. The situation in Rio was not an exception. We have supported each other, cried together and went on to the award ceremony.

– And how did Irina Viner evaluate your performance?

– Irina Viner was very happy of this medal. For me this silver is equal to gold, considering the heavy price I have to pay for it after my leg injury.

– Until 2015 you have always beaten Margarita Mamun in all-around competitions. Was it injury which deprived you of the status of the favorite?

– Yes, in the last competitions I haven’t already had any advantage over Rita. After the surgery I began to lose more often. And at the Olympics I was no longer a favorite. The gold of Mamun is absolutely expected and natural. She had a lot more competitions during the last pre-Olympic months. I performed much less because of the injury; I have spent a lot of time on the recovery. There were problems with competitive practicing. Perhaps this has led to the mistake with clubs.

– But have you managed to recover before your arrival to Rio?

– The injury was gone but the pain remained. It couldn’t be other way after the surgery. I tried not to show it in public, that’s why now I realize that the fans expected a different of me. I want to apologize that I couldn’t meet their expectations. But again, with all the medical circumstances this silver for me is a true success.

– Did you manage to see the city during your stay in Rio?

– Hardly ever. Our competitions took place in the last days of the Olympics. And for sightseeing we had just one day before the flight back to Moscow. But it was devoted to packing the suitcases and taking part in the closing ceremony. Frankly speaking there wasn’t any desire to go to downtown. Before we set off to Rio, we had constantly been warned about the danger in streets and we had been asked not to leave the Olympic village without any need. So we tried not to go out. But I have the most positive impression from the competition hall. The audience was very friendly. I don’t know how it was in other competitions, but I have felt a very positive attitude towards myself. I think all the girls from our team will tell you the same.

– I don’t want to speak badly about the city and the atmosphere in it. Everything was positive and the fest was a success. And the problems of accommodation affected everyone. We were not the only athletes who lived in the Olympic village. Other teams have also faced the same difficulties, so we all were in equal conditions.

– What do you expect from the next Olympic cycle?

– It is four years. We must first live up to Tokyo 2020. But I can say I really want to perform at the next Olympics. There is a feeling of incompleteness, unfinished work.