Evgenia Kanaeva: the results of our girls speak for themselves, we’re the best! 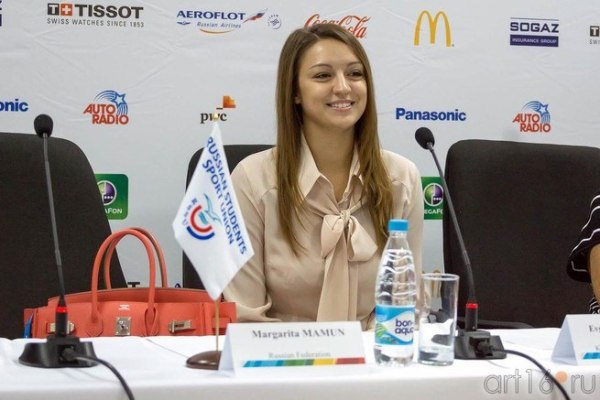 Posted on http://www.allsportinfo.ru/index.php?id=73519 on 16-07-2013 Originally written in Russian by Vladimir Ivanov Edited and translated by catts  (many many THANKS!!!)

Today, July 16, is the medal ceremony day of the 10th Summer Universiade in Kazan. The RG tournament has come to an end. The Russians so far have got five victories in five disciplines. The emotions of the tournament that were experienced by Vladimir Ivanov – the special correspondent of the sport information agency “All Sport” – were shared by the double Olympic champion Evgenia Kanaeva.

‘The results of our girls speak for themselves, we are the best,’ commented Evgeniya Kanaeva on the performance of the Russian team. ‘It was very nice to watch, and I cheered them on.’

All Sport: With the same performance at the upcoming World Championships in Kiev (Ukraine), will we get the same results?
EK: Our team cannot stand still. Universiade is over. After a month and a half, I think there will be many changes.

AS: Zhenya, during your temporary break – as we all hope it is, the girls had learned some elements which … do you think you can do them?
EK: The great advantage of our team is that each gymnast carries out the routine with some specific features. If everything is to be repeated after one another, it will not be interesting. With your own personal elements, an extra enthusiasm is added.

AS: Margarita Mamun said that she wanted to be like you.
EK: It flatters me (laughs). It is the soul and the body that make a stunning exercise and I am very pleased that Rita achieves such success. She’s a big workaholic!

AS: It is your hard work and perseverance that she has taken note of.
EK: Rita is very hardworking and stubborn (or, persistent)!

AS: Zhenya, tell me why did you decide to take a break?
EK: There are a lot of reasons. Health, family and a lot more other reasons.

AS: When will you make a final decision?
EK: When I have made up my mind, for sure I will talk about it.

AS: Do you stretch on the carpet now?
EK: I do (laughs). On my own. Sometimes. Individually (smiles).

AS: Do our young girls ask you something, as if you were a more experienced friend?
EK: They are very shy toward us. But sometimes they ask. We are like a large and closely-knitted family, in which everyone is willing to help each other.

AS: Do you feel yourself now as the queen of RG?
EK: Never have I felt as such (laughs). I am glad, of course, and many thanks to the people whom have worked with me.There were successes, but I have never put myself above others.

AS: Do you have a hero in RG?
EK: There are people whom I admire. This applies to the behavior and human qualities. When I was growing up, for me the examples were Alina Kabaeva and Irina Tchachina. With amazement, I looked up to Olga Kapranova and Vera Sesina. If I have ever taken examples of people from other sports, they were Yelena Isinbayeva and my friend Larisa Ilchenko.

AS: She is now also taking a break from performing …
EK: Their sport is very demanding, and I think she has taken absolutely the right decision. Every girl wants to be a mother, and it is impossible to be without injury in a big sport. It is essential to take care of your own health and opportunities.

AS: Alina Kabaeva said that you have the strength to return to sport even after giving birth.
EK: Alina is a very positive person(laughs). She is always ready to support!

5 Responses to Evgenia Kanaeva: the results of our girls speak for themselves, we’re the best!