Original article link: http://omskzdes.ru/news/detail.php?ELEMENT_ID=17982
retlated news: http://www.omsk.aif.ru/sport/news/87464
translated by google, sorry for some mistakes, anyway, the most important thing is Zhenya and Vera Shtelbamus both were honored the arward “courage” once again! Congratulations to Zhenya and Vera Shtelbaums – Zoe

Today (24th May), the ceremony of the governor’s sports award “Courage” on the results of 2012. Once again, these honors were awarded two-time Olympic champion in rhythmic gymnastics Evgenia Kanaeva and her coach Vera Shtelbaums.

“During the time that this award exists, its owners were more than 100 people. This is a worthy figure”, – said Viktor Nazarov. The head of the region emphasized that the year 2012 in sports Irtysh was of great importance, because the competition only regional importance were held over 250, many of Omsk adequately competes federal and international level, including at the Olympics and Paralympics in London.

Participants of the Games-2012 today received four statuettes. The best athlete of the area has once again become the “golden artist” Evgenia Kanaeva (gymnast could not attend the ceremony, the award will give the girl after her coach), has expanded her “valiant” collection and mentor champion Vera Shtelbaums again recognized the best coach Irtysh. “The most important thing – to raise their charges, primarily as individuals, and the successes already then they will come – says expert professional secrets. – Always tell the girls: it is important that you become a real man and wanted a society that talent and diligence will get you nowhere . “……… 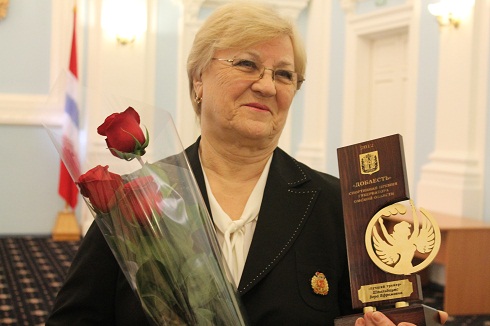