Kanaeva Confirmed She Was Not Leaving Gymnastics, She is Just Undergoing Treatment (she will decide continuing or not later) 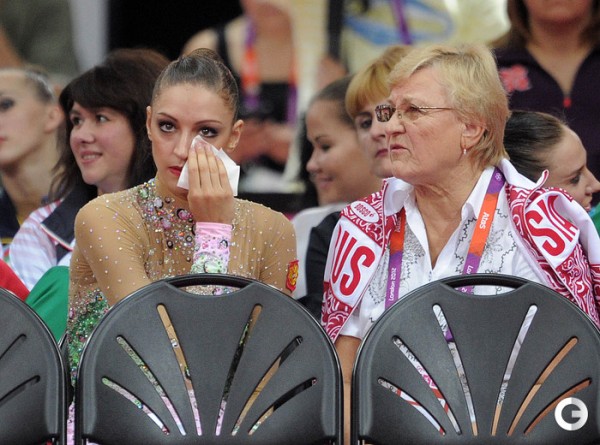 Moscow, January 21 – R-Sport, Alexandra Vladimirova. Two-time Olympic champion in RG – Evgenia Kanaeva has informed “R-Sport” that so far she was not planning to announce her retirement; she’ll decide whether or not she continues to take part in competitions only after she has fully recovered. In mid January, on the official website of Rus RG Federation, there appeared an announcement that 22-year-old Kanaeva had finished her career as a gymnast. Five days later, head coach of the national team, Irina Viner refuted that information.

“It is true, I was not planning to announce my retirement. I will decide later, there is still time. Most importantly, no one is pressuring me. They keep telling me to take care of my health. When I have recovered, then I will make the decision”, – said Kanaeva over the phone.

“At this time, I prefer not to discuss the likelihood of my staying in gymnastics. But I have not left. For the last six months, I have been attending to my health, and we’ll see what happens next. We’ll discuss everything with my personal coach, with the head coach of the Russian national team and we’ll make the decision together. This is my team, without which I would not succeeded and would not have been Zhenya Kanaeva”, – added the two-time Olympic champion.

Kanaeva suggested that the announcement about her retirement had appeared on RRGF website not only because she had not been training.

“In addition, I removed myself from the doping control list, which I had had to inform of my whereabouts on a daily basis for the last five years. I went abroad for treatment, and did not want to be supervised, so I made a notification that I had not been planning to take part in upcoming competitions. Most likely, that was the reason why they decided I had retired”, – mentioned the athlete.

Kanaeva confessed she had been feeling relieved when she no longer needed to constantly notify doping control agencies of her location.

“Frankly speaking, it bothers every athlete. God forbid, something unforeseen happens, for instance, there is no internet connection. It means you would need to call in at once and explain that from 4 to 6 you are not going to be at the base, because you are leaving for a hospital or somewhere else. Or a person can simply forget. If a doping control representative comes in and the athlete is not there – you get a blank. Three blanks – disqualification. But these are the rules, and everyone follows them”, – noted the athlete.

“There was a time when they came at 6 in the morning. There was another case: the first finals of the world cup were completed, and we were supposed to compete again the next morning. It took forever to pass the doping test, and I had to wait till 3-4 am. But sport is sport, and nobody cared who went to bed when. Later, of course, they apologized and told us that next time, if we did not get to take the doping test before 11 pm, we would take it after another competition”, – added the champion.

Kanaeva told us that right now she is closely attending to her health. “Frankly speaking, I do not have time for anything else. Beside the leg, I’ve been having trouble with my back, and my immune system is weakened. Every athlete knows what it entails to pass through an Olympic cycle. It is impossible to remain fully healthy; moreover, during the four years, you have to stay on top. I had to endure during the season”, – stressed Kanaeva.
Even if Kanaeva decides to stay, the likelihood of her taking part in the upcoming world championships are quite small, added the athlete.

“Most likely no. However, it is hard to predict. World championships are taking place in six months. Is it realistic to get in shape till then? I don’t know. I have never had such long breaks, during previous years, I had worked without breaks”, – concluded the two-time Olympic champion.

5 Responses to Kanaeva Confirmed She Was Not Leaving Gymnastics, She is Just Undergoing Treatment (she will decide continuing or not later)