Complete English translation, made by Alyona, many many thanks for Her big efforts

Reporter: When Evgenia Kanaeva works on the carpet, you cannot hear so common shout of the trainers. But you can see a smile on the face of Vera Shtelbaums and her student, even when the hoop in the new routine doesn’t want to fly in the right direction.

Vera Shtelbaums: We usually solve all the problems in a calm manner. She is a very young gymnast yet and, of course, it was hard. Because beside all the main events such as WC, EC, World Games and Universiade, she had to take part in other events; and everywhere she had to show the best she could. Of course, it was tough, but Zhenya handled it well. She didn’t let anybody get the gold.

Reporter: You can win as much as you CAN, and Kanaeva will win as much as she WANTS. Only in this season she became a 5-time European Champion, a 6-time World Champion, all-around Champion of Grand Prix Final. So far everything goes so smoothly, that they are afraid to be put off by too much praise.

Irina Viner: Zhenechka, so far, is above everyone… Knock the wood! She is a very clever girl. I wish her to remain healthy. Yesterday we were discussing the plans for future with Vera Shtelbaums and we decided to take a very good care of Zhenya and spare her strength. She deserves it.

Reporter: Four absolutely new routines have to be prepared within just a month. Zhenya will practice them till December, 30. Then she will fly to Omsk to celebrate the New Year with her parents, watching television and drinking some Champaign. For the Olympic Champion New Year is a family holiday.

Zhenya: We will have just few days off, because the competition season starts very early this year. In January we will already take part in World Cup. We used to start the season at the end of February – beginning of March. And this year we already have the first significant start in January. Now we are preparing a new program – I have four new routines. There is much to work at.

Reporter: According to the doctors it will be easier for gymnasts to work now. Just few days ago a distal counterpulsation device was brought to Novogorsk. It was developed overseas and upgraded in China; this device has been used by NBA players for more than thirty years. Now not only American Dream Team possesses this technical miracle, but the Russian Gymnastic Dream Team as well.

Irina Viner: My granny used to say: “One must reap, as one has sown”. She referred these words to her pies, and I apply them to gymnastics. This device will help children to recover after the trainings, after hard work. It restores the pulse, the blood circulation and therefore, the main organ – the heart – is not overloaded. For us it is very important. It also good for the trainers, because when we get too much stress, we can also use this machine.

Reporter: People say the success of the football team Rubin from Kazan was caused by the usage of this device. If even our football players started to win, what shall we tell about our gymnasts who are still best in the world! We will learn the first result already in January!

hoop – music from the ballet "the Rite of Spring" by Stravinsky. (not the music that Zhenya used @Gymgala Gent 2009)
ribbon – tango;
rope – Gypsy music. 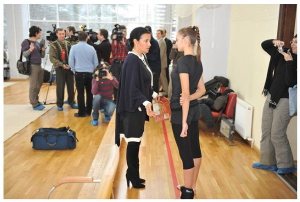