Vera Shtelbaums: There was more sport under the former Code of Points

Original article link: http://rg.sport.ua/news/200659
English translated by Alyona, Many Many Thanks!!!

This year Evgenia Kanaeva has taken an unlimited break. The date of her comeback is still under the question. This explains why the coach of the two-time Olympic champion has come to Kiev as a spectator. It was very nice of Vera Efremovna to answer the questions of Sport.ua, although group finals were supposed to start in about five minutes.

– Vera Efremovna, what do you think about the organization of the World Championship?
– I can say that the organizers have done great work. It is very comfortable here. Probably there were some mistakes but as a spectator I haven’t noticed any problems.

– I wouldn’t like to discuss the judging. Let’s only say whether it was fair or not.
– It was, in all. Nothing is perfect but in fact the judging was fair enough. By the way, I can say that the new COP has made the work of judges easier.

– How come?
– There are less elements, now we have nine of them instead of twelve. There used to be three groups of judges: body elements, apparatus work and execution. Now they have only two groups: body and apparatus are united in one and execution remained as before.

– What do you think about the changes in COP?
– To tell you the truth, I don’t like it. It looks as though we are leaving the sport behind and going to have more of a show and dance. There was more sport in the former COP, it was more complicated.

– How is Evgenia Kanaeva doing?
– Zhenya has graduated from the University, now she is applying for the Master’s Degree. She’s been learning foreign languages; she wants to speak English fluently. Moreover, as you probably know, on the 8th of June she married Igor Mousatov, a hockey player. Zhenya devotes much time to her family now. She adores children and she wants to have her own ones.

– Do you keep in touch?
– Of course, we do! Zhenya is a wonderful person, very kind and sincere. She is fine now and I am very happy to know that.

– There is much information about her comeback to sports. What do you think about that?
– I don’t see any sense in it. What for? She has won every possible medal. At that, she has a family now and they want to have kids with her husband. There is no final decision but I think she won’t come back. And you know what, a person needs to retire at the peak of his career.

– Is there any follower, a new Omsk star?
– I can say that we have many talented kids. But a lot depends on the personal characteristics. Just talent is not enough. I can give you the example of your gymnast Anna Rizatdinova. She hasn’t got any special bents, but due to her hard work she has become a very good gymnast and as you see she has won the world championship. It was the same with Zhenya Kanaeva. She didn’t have any special talent but with her ability to work hard she achieved a lot. Even after becoming the Olympic champion she wouldn’t leave the training hall until she made her routine perfect. It is an important part of the way to success.

– It was much spoken about Evgenia Kanaeva as of an extremely kind, hardworking and easygoing person. Is it all true?
– It is, indeed!

– Are the training conditions in Omsk good enough?
– Yes, our conditions are splendid! The Center of the Rhythmic Gymnastics has been reconstructed recently. We used to have two carpets, which was not bad in fact, but it wasn’t enough for all those kids who we train there. So after the reconstruction we have two old carpets, a brand-new hall with three more carpets and one more hall for the warm-up with two more carpets. The ceilings are high, there is much space and comfortable changing rooms.

– What about the financial part? Does the government help?
– Moscow gives us money regularly. But the problem is that we are too far away from the capital city. Just imagine, it takes two days by train (smiles). We get money for all the official tournaments. Parents buy leotards and apparatus. It’s a world-wide practice.

– Is rhythmic gymnastics popular in Omsk?
– Yes, it is. We have many children who try to follow the steps of Irina Tchaschina and Zhenya Kanaeva. There are many fans of gymnastics. Our girls are regularly chosen for the National Team of Russia. At the moment there are 5 or 6 girls from Omsk. Here in Kiev you can see Ksenia Dudkina, a member of Russian group, who is from Omsk as well.

– How many girls train in your Center nowadays?
– About 500 girls, from the little ones to the seniors.

– Do you personally deal with the seniors or with the little ones as well.
– I train both small and big ones. But I am not the only coach in our Center of course (laughs). Now I spend much time in our school in Omsk. Before I used to go from competition to competition with Zhenya and I couldn’t spend much time at home.

– What can you say about the Ukrainian gymnasts?
– I like Anna Rizatdinova, she is very hardworking and I respect her for that. I like Maksimenko as well, but she has some negligence, she is too emotional… As you see, it doesn’t let her achieve high results. Mazur, Shinkarenko, all are good. You have a very strong team of professionals who work with the gymnasts. I know Albina Derugina for ages, we used to meet in the sport camps during the Soviet times.

– What do you say about the Russians?
– Both of them are good girls, very young and talented. Let’s see what becomes of them in the future…

– Thank you very much, Vera Efremovna! It was very nice to talk to you!
– Thank you! 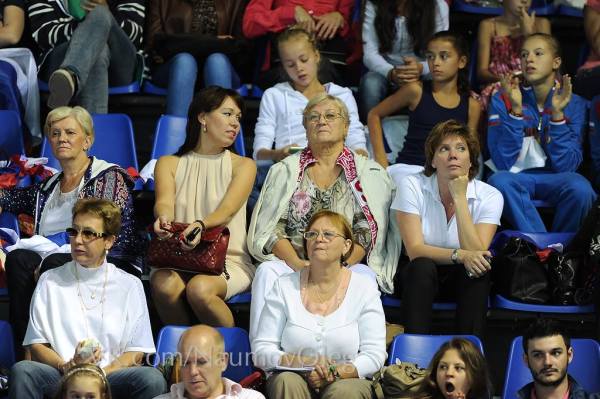 3 Responses to Vera Shtelbaums: There was more sport under the former Code of Points