INTERVIEW DAY- Evgenia Kanaeva: I do not want to make my personal life be like a show

http://www.bk55.ru/?id=64&idinterview=107
Originally written in Russian by Konstantin Ivigin on 4 September 2012
translated and edited by catts

Olympic champion Evgenia Kanaeva and Kseniya Dudkina visited Governor Victor Nazarov and held a joint press conference afterward. During the meeting with the journalists Kanaeva talked about her plans of moving to Moscow, but did not answer to the questions about a possible wedding. Dudkina talked less but netherveless little sport exploit of her took place there (meant her performance even with dislocated shoulder a few days before competition) The correspondent of “BK” has recorded the most interesting parts of conversation.

Q: Evgenia, you are the first one in the history of rhythmic gymnastics to have become the double champion in the individual all-around competition. Can you compare the current experience and the one four years ago?

EK: The main difference is, in London, I knew very well what I had to do and what to expect in the tournament. In 2008, I carried out my routines as if I was a “machine”. Now, I tried to maximize my thoughts on each element.

Q: You have said that before the Olympics you lost eight kilograms. Why?

EK: Well, so that I would not roll out of the carpet (laughs and lighten up.) Nevertheless, I am a little older than the rest of the girls. They are here (pointing right hand little finger – in order to indicate they are slimmer – catts’ comment), and I am here (probably indicating she has a slight fatter shape – catts’ comment) … Of course, we had to care for ourselves.

Q: From the Olympians Foundation you received luxury cars – Audi A8. Have you already started driving them around?

EK: I have not got the license, but am taking drive lessons. I like it.

KD: And for me it is too early to go to driving school. (Dudkin is not 18 years old yet – Ed.) My mom is keeping the car at the moment.

Q: The other day you had the ‘Olympic lessons’ at schools in Moscow and Omsk. What were the impressions?

EK: I liked it. The children were with burning eyes, and it was obvious that the lesson gave them a sincere interest. They asked a lot of questions. By the way, I am going to do the same lesson in Omsk with my own school, and the meeting is scheduled on Tuesday.

KD: I also had a good impression. I do not happen to be in my school too often, and I am glad I made a visit.

Q: Evgenia, shortly before the Olympics, you appeared in an advertisement of the shampoo Pantene. Are there any new offers after the Olympics?

EK: I will say that I did not agree to do this advertisement immediately. I have this principle: sport is to be my first priority. I do not want to waste time. Moreover, when it was proposed to me, there was no guarantee that I would be going to the Olympics. I was not to give myself a spot in the team. And I did not take up any more advertising offer.

Q: Now on the internet there is a heated discussion about your possible wedding. Can you say something about this?

EK: No. I do not want to make my personal life be like a show.

Q: Kseniya, what was the biggest difficulty you had during the last Olympics?

Arais: Ksusha, you may talk about how you got injured five days before the competition started.

KD: Yes, there was this episode. During training, the girls performed support and dropped me. I dislocated my shoulder. For two days I could not train but rest.

Q: What are your future plans?

KD: On 7 September, I need to be in Novogorsk. Regular training will begin. Would I like to become an individual gymnast? This proposal is a series of “possible, but not necessary.” I am quite happy with my current role in the team exercises.

EK: I am still having my rest. I do not think about competitions.

Q: Evgenia, you have long been living in two cities, Omsk and Moscow. Are there any plans to move to the capital?

EK: Yes. I cannot say a specific date. But I want to emphasize that I will always regard Omsk as my hometown.

Q: Zhenya, you have traveled around the world, but more than once you had said that you really did not have time to see much during competitions. Maybe now is the chance?

EK: It is definitely my dream to travel around the world. The good destination is Austria because of its mountains. It would be nice to go to Australia and New Zealand. And the U.S. would also be interesting for me – I like New York. 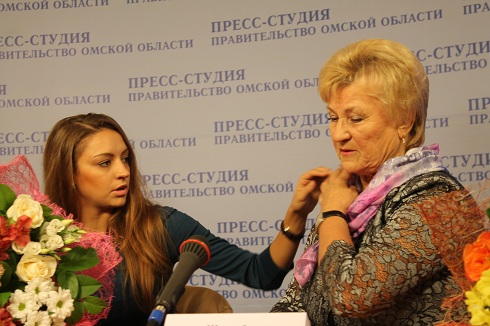 Extract from ‘Kanaeva does not want to think about training’ on 3 September 2012
http://www.omskinform.ru/main.php?id=1&nid=55810
originally written in Russian by Evgeni Yarov
translated and edited by catts

Evgenia Kanaeva also said that during the Olympics she did not sleep well. And it turned out that the gymnast’s coach Vera Shtelbaums, prior to any important start, would rub her student’s ears. But this act was not possible in the Olympics.

‘This is our secret,’ said Shtelbaums. ‘But at the Olympics before going on the carpet, we would be in a dark corridor where even the ears cannot be seen. In general, all the receptors (or nerves, or acupuncture points) are located at the ears.’

‘When the anxiety was strong, I ask Vera Efremovna to rub harder,’ continued Evgenia Kanaeva. ‘Sometimes even scratch mark is left behind. During performance the ears are burning, but I would perform well.’
—————–

Extract from http://www.omskinform.ru/main.php?id=1&nid=55810
translated and edited by catts

Evgenia Kanaeva admitted that there had been a lot of doubts on the path to the second “gold”. These were doubts concerning her own abilities and her strength. The girl admitted that success appeared to be something unattainable, if not because of her trainer Vera Shtelbaums – who stoically tolerated Zhenya’s un-needed frustrations/complains/blow-ups – a London triumph could not have happened. “There were crazinesses. There were nerves. I wanted to give it all up. It seemed like nothing worked out. But the trainers helped, and I could always feel their support. You know, if the next Olympics will start tomorrow, without hesitation I will step onto the carpet.”

However, the next OG is not going to happen tomorrow, but in 2016. Evgenia Kanaeva claims to be feeling nervous about taking part in it. Now the champion is taking a break, and there is not limit to its duration.

5 Responses to INTERVIEW DAY- Evgenia Kanaeva: I do not want to make my personal life be like a show