Brief translation (the most interesting parts)

IV: My mother used to say “When I watch Evgenia Kanaeva performing, I am absolutely relaxed, as if I am watching Plissetskaya” (Plissetskaya is a world famous ballet dancer).

H: People say that the girls were not allowed to use their mobile phones during the preparation for the OG. Is this true?

IV: During the last six months they lived in a “prison” with upgraded conditions.

H: Zhenya, how did it feel like to live in that sort of “prison”? How was the food?

EK: The food was ok. Of course, it was not easy as for every sportsman during the preparation time. But it was worthwhile.

IV: So many people supported us all around the world – from little girls to grown up men. And it would be a great shame to lose. This what I tried to convince the girls about and they understood it.

H: Zhenya, have you read the titles of the British and French newspapers: KANAEVA IS UNREACHABLE; A RUSSIAN MAKES HISTORY; KANAEVA IS PHENOMINAL, ONE DOESN’T NEED TO BE RUSSIAN TO UNDERSTAND HOW GOOD KANAEVA IS, etc.? Have you read it?

H: No? So you should know that the whole world admires you, not only Russia!

H: I know that one of your colleges supported you as well – Aliya Moustafina. Alia, were you among the audience?

Aliya: No, unfortunately I couldn’t visit the competition, but I was following it on TV.

EK: I haven’t seen Aliya performed either because I never watch competitions before I finish mine. But I supported her as well and we exchanged messages on phone.

IV: The conditions during the preparation for the OG were just great. The girls had everything they needed except freedom. We had the best medicine, food, recovery supplement. The government did everything for us! 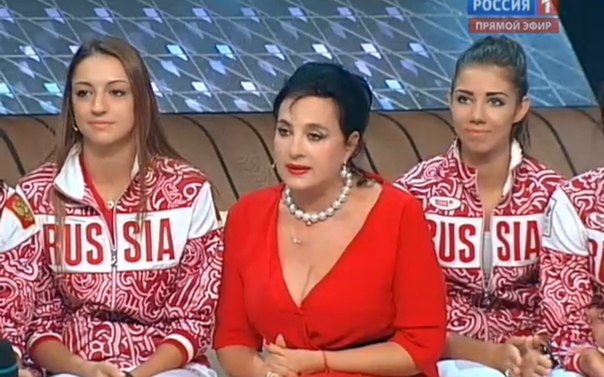 This entry was posted in Translation, Video. Bookmark the permalink.