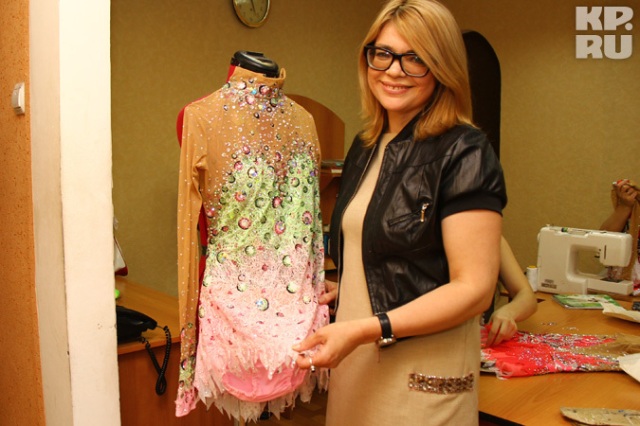 OK now the designer of Zhenya’s leo shows her new Chopin Ribbon 2.0 leotard to us…and remembered the guess her ribbon leo color game? So the answer is light green in combination with pink decorated with 7000 swarowski….(I think no one got the right answer, I will check all your answers later…)

For many years the success of the Russian National RG Team depended on two people – the team coach Irina Viner and the designer from Nizhniy Novgorod Marina Gogua. On the 27th of July the United Kingdom will host the XXX Olympic Games – the competition every athlete is dreaming about. But only the best sportsmen deserve to participate in the World Games: the strongest and the most effective. Just as in previous Olympics the designer from Novgorod will be responsible for the beauty of the Russian gymnasts. Wearing leotards made by her our gymnasts have achieved many historical victories. In fact, leotards made by Gogua are special, with the mascot. A beautiful eye hidden in the pattern of the leotard made Alina Kabaeva the queen of the 2004 Olympics. And in 2008 there was no one equal to Evgenia Kanaeva in Beijing.

– An eye is my talisman that brings victory, – confessed Gogua on the eve of the Beijing Olympics. – But it is just a little bonus. Because the main reason of the success of Russian gymnasts is their immensely hard working.

So what has Marina created for London?

– I have really many ideas how our Team should look like, – says Gogua looking through the album with patterns. I thing this year the ‘Olympic’ leotards will be in gentle colors. But at that they will look luxurious, rich, decorated with gems. I wouldn’t like to open all the secrets now. But be sure all the costumes will be ‘saturated’ with good energy.

Marina Gogua made an exception for our newspaper and showed us one of the most exclusive leotards sewed for the star of the Russian Rhythmic team Evgenia Kanaeva.

– This leo looks very gentle due to the ornament of small and big stones (There are 7000 Swarovski stones on it!). Zhenya liked the transition from green to pink. She will wear this leotard during the European Championship which will be held in Nizhniy Novgorod in the beginning of June, – Marina Gogua opens the secret. – And then I hope to see this leotard on her during the Olympic Games in London. She will surely win!

This entry was posted in Information, News, Translation, Zhenya. Bookmark the permalink.