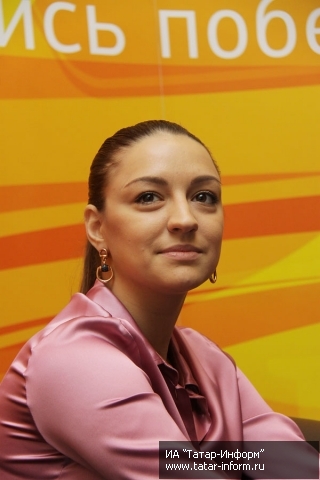 In the course of the conversation, she confessed that she would not sign her future daughter up for artistic gymnastics.

As a reminder, two-time Olympic champion, multi-world and European champion has come to Kazan to attend Russian RG championships, which opened yesterday at the Center of Gymnastics.

Immediately after class, rector Yusup Yakubov and the honorary guest entered the classroom and were met with applause. The gymnast’s performance at 2012 London Olympics were shown on a specially installed wall screen. Those were club, hoop, ribbon and ball routines. After the presentation, the champion was simply bombarded with questions.

Of course, the students are curious about the Olympic experience, because, as was noted by the rector, they are about the same age as Evgenia. And the athlete revealed that she is currently studying to become a coach. The young lady told the audience that before the competitions, the athletes had been watching through their own training videos in order to catch mistakes. Among the factors that helped Evgenia win, she mentioned the wonderful coach, good training conditions and the fact that she had a chance to train side by side with XXVIII Athens Olympic Games silver medalist Irina Tchashina.

A year before the Olympics, Evgenia was told that there was no room on the national team; even more so taking into account that at that time, the future Olympic champion had not yet passed the Olympic cycle. The athletes that were on the national team were four years older than her and had extensive experience. But it so happened that six months before the Games, she started earning more and more victories. That was how Evgenia ended up among those to defend Russia’s honor at the Olympic Games.

As revealed by the athlete, at the pedestal, she was happy that she had not let anybody from her huge support team down. Evgenia is very self-critical and does not consider any of her performances perfect. Entering the field of play, she is not thinking about winning. The main goal for her is not the competition but improving her own drawbacks and character. During the Olympics, a psychologist was helping the athletes but Evgenia handled her nerves herself.

Answering questions about future, she assured the students that she had not retired from the sport but was taking a temporary leave to improve her health. Time will show what is going to happen between her and gymnastics in the future.  Being passionate about sports, she would sign her future children up for figure skating or artistic gymnastics.  “I see how hard and injury-prone it is. So I would not wish so many injuries on my daughter, so, most likely, I would not sign her up for artistic gymnastics”, – said Evgenia.

Evgenia compared Universiade and Olympics where she competed equal number of times. There are similarities in organization, but there are also differences. Universiade is close to Olympics: there are the Olympic village and all kinds of sports. But Olympics are of course a level higher.

Evgenia refuted the gossip of her moving to Omsk. Since the age of 11, she has been living in Moscow with the national team. Evgenia told about her beginnings in the sport.  She was plump as a child, and was also clubfooted, which is why her grandmother signed her up for RG when she was 6 years old. Talking about what is better – pursue a sport professionally or enjoy doing it for oneself, she said that if you have a talent and determination, by all means get into the professional sports.

Naturally, the students were also interested in what is going on “behind the scenes” in sports. Evgenia told them that the members of the team were friends but never best friends. At the end, rector Yusup Yakubov presented Evgenia with the official scarf of the academy and wished her future successes.