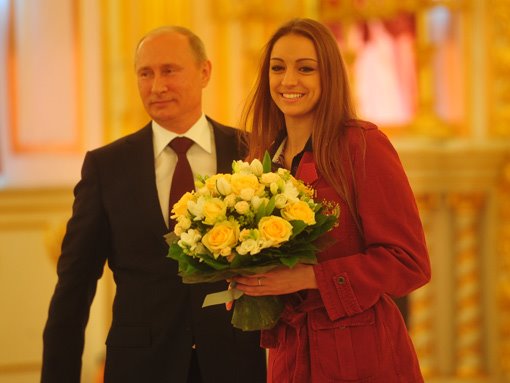 news link: http://www.sports.ru/others/142711066.html
and the award ceremony for Olympic medalists video here
http://www.vesti.ru/videos?vid=438952
English translated by Bing, edited by catts, many many thanks!!!

On 15th Aug, Russian President Vladimir Putin presented orders and medals to the members of the Russian team, who performed successfully in the Olympics Games 2012 in London.

Order of ‘Merit for the Fatherland IV Degree’ was awarded to two-times Olympic rhythmic gymnastics champion Evgenia Kanaeva and to the five winners of the London Games in synchronized swimming, including five-times Olympic champion Anastasia Davydova.

‘Medal of Honor’ was awarded to Natalia Antyukh and the leader of the Russian national volleyball men’s team Sergei Tetyukhin. 34 Russian athletes received the ‘Order of Friendship’, and the rest –  the medal of ‘Order of Merit for the Fatherland I and II degrees’.

Putin presented the awards to the Olympians in the Alexander Hall of the Grand Kremlin Palace. The event was attended by 82 athletes, as well as coaches and leaders of the sports federations, according to the official report.

P.S.  I remember in 2008 Zhenya received a Benz for her first Olympic gold!

This entry was posted in London 2012, News. Bookmark the permalink.