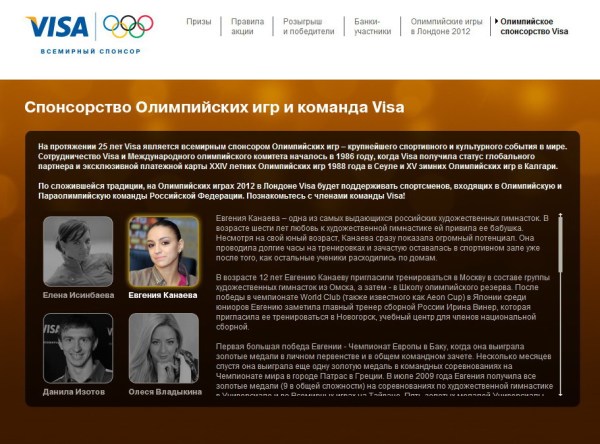 Just found in visa.ru website, Zhenya is one of the athletes who are sponsored by visa for London 2012, check here:
http://www.visa.com.ru/promo/visa_olympic_2012/sponsorship2.html

Visa.ru had released one promote/commercial video for Russian pole vaulter-Yelena Isinbayeva on youtube, hopefully they will make one for Zhenya too!
http://www.youtube.com/watch?v=xNhJ20XBA38

For 25 years, Visa is a global sponsor of the Olympic Games – the largest sporting and cultural events in the world. Visa and Cooperation of the International Olympic Committee began in 1986 when Visa received the status of a global partner and exclusive payment card XXIV Olympic Games in Seoul in 1988 and XV Olympic Winter Games in Calgary.

By tradition, the Olympic Games 2012 in London, Visa will support athletes, members of the Olympic and Paralympic team Russia. Meet with team members Visa!

This entry was posted in Information, News. Bookmark the permalink.