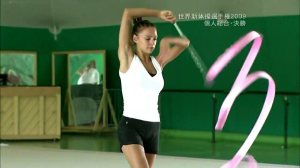 English translated by google translator…
In the final Grand Prix of rhythmic gymnastics, which will be held November 26-30 in Berlin (Germany), speaking all three Rossiyanka, was among the finalists for the past seven phases – Olympic champion Evgenia Kanaeva-2008 and world champion team-2009 Daria Kondakova and Olga Kapranova. This is the Agency of sport information "All Sport" said President Rhythmic Gymnastics Federation of Russia, Russia head coach Irina Viner.

"Grand Prix – a mandatory event at the end of the year in competitive gymnastics, – noted Irina Viner. – Following the Grand Prix at him only to get the best of the best in the current season. This replacement – banned: act exactly those who obtain the necessary amount of points. You could say it kind of bold point. We made their way to the finals, three athletes – the leader of the team, Olympic champion Evgenia Kanaeva and world champion 2009 team Daria Kondakova and Olga Kapranova. In fact, participants from Russia could be four. Vera Sessina ranks fourth in the rope and ribbon, sixth place – in the hoop, that is, has every right to speak in Berlin. But, as you know, Vera decided to finish his career. So what will be the three of us.

Irina Viner also clarified that after the completion of the final Grand Prix team leaders Evgenia Kanaeva and Daria Kondakova not complete the competitive season. "According to tradition, Eugene and Dasha in November will serve in the championship in Italy as" legionnaires ", trying to lead his team to the title of champions of the country", – said Irina Viner.

2. 19:24 13.10.2009
Kanaeva will not take part in the Cup of Russia…
http://news.sportbox.ru/Vidy_sporta/hud_gimnastika/spbnews_Kanaeva-ne-vistupit-na-Kubke-Rossii

The leader of the team Russia Evgenia Kanaeva will not take part in the Cup of Russia, which will be held in Kazan from 22 to 25 October.

– Cup of Russia in Kazan will be for us to start the final major of the season at the All level, – quotes agency "Ves Sport" President Rhythmic Gymnastics Federation of Russia, head coach of Russia Irina Viner. – Given that it will take place in the forum "Russia – Sports Power, in the presence of many distinguished foreign and domestic guests, we decided to put all the best. Presentations will world champion team this year, Daria Kondakova, Olga Kapranova and Daria Dmitrieva, promising young girl Yana Lukonina, Alexandra Ermakova, Olga Stryuchkova our young gymnasts, for whom the Cup of Russia will be one of the stages of selection for the Youth Olympic Games 2010 in Singapore.

Not only will our leader Zhenya Kanaeva. This year it is "close" almost all starts – the World Cup and Grand Prix, the championship of Russia, Student World Games, finally, the championship of the world, and feels a little tired. We decided to give her a break, since the month of October it is still a mandatory part in the final Grand Prix in Berlin.