Article: To surpass Kabaeva, only Kanaeva is capable

This beautiful photo was published originally here: http://krass.livejournal.com/616836.html
Article was originally written in Russian by Shulga Nadezhda on 29.09.2009; published on http://www.sobesednik.ru/publications/sobesednik/2009/09/37/kanaeva_sob_37_2009/
English text is translated and edited by catts
—————

Since last year she has not lost in any tournament. And in the recent World Championship she has won all six gold medals – having surpassed Alina Kabaeva. Irina Viner believes that her name should be recorded in the Book of Guinness. However, Zhenya herself will not stop going further.

It is impossible to find a day when she is not stretching, practicing and tossing the apparatus. Having returned from Japan to native city Omsk, she has been going to the gymnasium. She first received some physio-treatment (ie. massage). Afterward she started warming up, and then training. The youngsters there watched every movement of the champion with open mouths. Then, it appeared that Zhenya helped correct one girl’s mistakes, and assisted another girl in her routine.

‘Evgenia does not have her own hall or carpet, and therefore she is training with everyone and with everything,’ Kanaeva’s first trainer Elena Arais told "Interlocutor (the new of the magazine/journal)". ‘But since 2002 our RG centre has been given good German carpet. In the early days we rented a small hall in the ‘Ice palace’, where Zhenya’s grandmother waited long hours for the 5-year-old Zhenya in the dark.’

During her childhood the biggest problem was to keep Zhenya away from the gymnasium. During her time as a schoolgirl in the 2nd Grade, she would come for training at 9am and leavet just 5 minutes prior to the beginning of the first school lesson. While other young gymnasts had already left for school for a long time, Kanaeva practiced and practiced in order to master the new elements. It is good that the ‘palace’ was only a short distance away from her school.

‘At age 8 she was the winner of “Supreme Armed forces (possibly the name of an award)”,’ Elena Arais recalled. ‘She was very brave – in the sense that she never abandoned the difficult things from a routine … even if she had not mastered the element before the competitions. When she got nervous, she would calms herself down by thinking that she was not in an important competition but an ordinary regional event.’

The same happened in Beijing. Before her final ribbon routine, Zhenya got nervous when she suddenly realized she was in the Olympic Games. It is thus necessary for her trainer Vera Shtelbaums to joke to her by saying, ‘this is not the Olympic Games, but a home-base practice session’. Kanaeva then laughed, recomposed and won.

Many people may be jealous of Zhenya – a 19-year-old girl – that she has got it all. Due to her victory in Beijing, the President presented her a BMW, the governor of Omsk allocated her an apartment – and she also has an one-room apartment in Moscow, and some time this week she will go with her mum to Paris for a week holiday – a place where she visited herself last year. However, for 19 years this child has gone through so many tests, too many that some other people may not even have that many in their whole lives. At age 8 she had the opportunity to travel by train with reserved seats to take part in competitions in the Omsk region, Volgograd, Samara etc.. In fact, for a group of 15-20 children to travel by plane was simply an expensive luxury. Somehow, while on the train, in the middle of the night the small Zhenya woke up the trainer by saying, ‘Elena Nikolaevna (Arais), please get up!’ It appeared that a young man was confused in the dark and climbed up to Zhenya’s space on the second shelf without noticing there was a child. Gradually he ‘got rid’ of her. Certainly, in the end everything was sorted out but the incident was remembered.

‘Zhenya always was the first to help others,’ her childhood trainer (Arais) said with amazement. ‘We traveled on a train, and she woke me up early in the morning. With her came a more senior girl – by a year or two – whom she held her hands. The "little" Zhenya then told me that the "big" was ill – whether it was a stomach problem or a headache – I do not remember already. By this, it is sure that her sense of responsibility has nothing to do with her age.’

At age 12 Kanaeva was taken away to Moscow. At this age many children still played in a court yard, but she had already lived in the Center of Olympic Preparation. Certainly, there were tutors looking after the youngsters but the situation was not comparable to a family and a home. It was a test of character. Zhenya always found it easy to talk with others as she was so sociable. Everywhere she went she made friends with boys and girls.

She has continually been called to appear on television, but Zhenya refuses and prefers to spend 8-10 hours per day in the gymnasium. Recently she has declined the invitation to participate in ‘The Big Races’ on Channel 1. However, she is open toward doing advertising. Kanaeva is the representative of the well-known Swiss watch firm Longines – previous representatives include Kabaeva and Khorkina, and during the World Championship in Japan Zhenya was asked to become ‘the kefir ambassador’.

‘The fact is that Japan has begun to promote our Russian kefir, and I was simply invited to talk about it and to advertise it,’ Zhenya told "Interlocutor". ‘To the Japanese, our drink has the right taste. But my face does not appear on the kefir’s packaging.’

The Olympic champion also does not refuse unique shows as far as gymnastics is related. It is a pity that in Russia no such show was arranged. As a result, Kanaeva basically performs in front of foreign spectators. For example, after Japan – instead of returning home straight away – she went to South Korea to take part in the gala show.

‘I was part of the most beautiful show, together with sportive gymnasts, acrobats, stuntmen …’ Zhenya said with admiration. ‘For example, there were gymnasts such as Elena Zamolodchikova and Ivan Ivankov. It was very interesting, the hall was packed, and the audience’s reaction was great!

Nevertheless, this year in Russia Zhenya will have the chance to do a performance under a similar setting as there will be a gala concert during the Cup of Russia in Kazan.

In the mean time, Kanaeva is still in the middle of her one-week break in Omsk. It is necessary for her to take time to decorate and equip the apartment which was presented by the governor last year, to get together with friends and other folks, as well as to pass examinations in order to be qualified as a trainer.

‘Certainly, the tutors do come around to check, and they understand how much we train,’ Zhenya said. ‘However, it is not the moment for me to be engaged in serious education because I am not used to receiving ‘a tick’ by not studying properly.’

Having won the Olympic Games at 18 and six gold medals in the World Championship at 19, in terms of records Kanaeva has surpassed the well-known Alina Kabaeva. With such outstanding achievement, the present RG school in Omsk has been promised that a new section for spectators will built into the existing compound. However, although Omsk is proud of being the birthplace of RG champions such as Galima Shugurova, Irina Tchachina and now Zhenya Kanaeva, none of their names has yet been assigned to name any school, street or sporting facility. From Japan Zhenya brought home all 6 gold medals – will one of them somehow be kept in a museum? And earlier on there was an exhibition showing the RG leotards which were worn by some of the most successful students of the Omsk RG school during their competition days. Perhaps, by seeing these leotards, the little girls will be inspired to pursue the joy of being champions!

Zhenya has not lived in Omsk for 7 years, but her grandmother Irina Aleksandrovna – until recently – has never missed any local competitions, and she accurately keeps a record of her granddaughter’s results. Irina Aleksandrovna has already introduced her daughter Svetlana to RG – who had become the ‘Master of Sports’; and now granddaughter Zhenya even has gone a step further than her mum by winning the Olympic Games. So, can the secret of Zhenya Kanaeva’s victories be discovered in her grandmother – who is madly in love with RG? 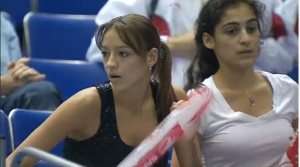