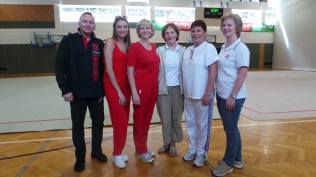 article link: http://www.ueg.org/en/Double-Olympic-champion-Evgenia-Kanaeva-talks-Olympics-2016-07-19-1230
19 July 2016
In exactly one month, the Rhythmic Gymnastics competition will kick off at the Rio 2016 Olympics.

Evgenia Kanaeva wrote history several times during her gymnastics career. She is the only rhythmic gymnast to win 2 Olympic golds, the first in 2008 which she then successfully defended in 2012. She was the first gymnast to sweep all gold medals at a Worlds. She accomplished this feat in 2009, only to repeat it in 2011. In 2009 she had a truly exceptional year: she swept the golds at the European and World Championships, the Universiade and the World Games! Kanaeva is also the only gymnast to receive a perfect score under the 30-points system. There is just one word to summarise all her achievements: wow!

Known for her consistency, elegant routines and high level of technical difficulty, Kanaeva amassed 17 world and 13 European titles in her impressive career. After the London Olympics she decided the hang up her ribbon and became a coach and the Vice-President of the Russian Rhythmic Gymnastics Federation, alongside fellow Omsk native Irina Tchachina, the 2004 Olympics silver medalist.

Kanaeva recently coached apparatus technique to 24 young girls at the UEG training camp in Obertraun (AUT) and made some time to answer the following questions:

UEG: As a gymnast, what goes through your head when you walk into an Olympic Arena?Kanaeva: It was fulfilling a dream and I was very happy that my dream became true. I was a little excited, at my first Olympics. With the first apparatus, my heart was pumping!

UEG: Did you get nervous before a competition? If yes, how did you handle it?
Kanaeva: I was nervous because I want to develop my form permanently. It is absolutely important to know that the training was enough, then the nerves are not so big. I was thinking that my mother would love me in the same way, with or without mistake My coach supports me very strongly and gave me security. 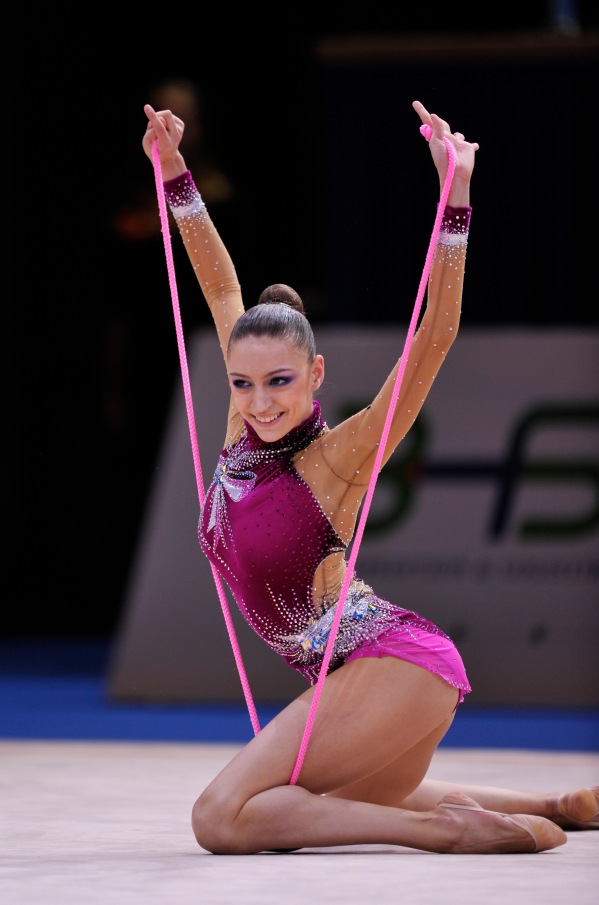 UEG: Who do you think will be on the podium in the Rhythmic competition in Rio?Kanaeva: In Russia we say ‘Human thinking, God is doing’ ( Человек предполагает, Бог располагает.) – there are a lot of very good gymnasts like the girls from Belarus, Ukraine, Georgia, Korea etc. Nevertheless I hope that my Russian colleagues will be on the podium. The competition becomes bigger and bigger due the development of [rhythmic gymnastics on] the other continents.

UEG: Where will you watch the Games and who do you support?
Kanaeva: At home – and of course those gymnasts who I know personally I send SMS for good luck, and I cross my fingers for all gymnasts.

UEG: How is life in the Olympic Village?
Kanaeva: I stayed only one time in the Olympic Village. That was in Beijing 2008 because in London 2012 the village was too far from the Gym.
I enjoyed the stay in the village, due the collegiality of all athletes in the village. Everybody supports everybody. Because the Rhythmic competitions are every time at the end of the Games, therefore we recognised all the celebrations and positive and negative emotions, which never you have in the life before and after.

UEG: How do you experience gymnastics now that you are not competing anymore? Was it difficult to adjust to being on the side-lines?
Kanaeva: I still love Gymnastics and I miss it immediately after my retirement. Now I work with young gymnasts and my intention is that they shall feel the same as I felt when I was active. The first two years after my retirement I always dreamed about my exercises and it was difficult to realise my life without gymnastics. Also there were a lot of very negative and sad situations in my private life immediately after my departure from competitive gymnastics. But, step by step, with my marriage and getting my son it becomes better and now, thanks to my family, I am now able to continue in my Sport as a coach.

UEG: What advice can you give to the competitors?
Kanaeva: Enjoy the Present, nobody knows what will happen tomorrow. If they want to have success, they have to work not only with the body – it is very important to work also with the head.

Thank you very much Evgenia!